In any event, it was insightful of him to juxtapose the two films. Anton Chigurh and The Joker are clearly cut from the same nihilistic cloth. They both — I would argue, innaccurately — think of themselves as Nietzschen Übermenschen. Like Hitler, and other evil men who utterly misunderstood Nietzsche, they’re really more like Hannibal Lecter than Nietzsche. Like Nietzsche — and, I would argue, like the Jesus who rejected the legalism of the Pharisees— they do reject a morality based on “rules” (Chigurh: “Let me ask you a question: if the rule you followed brought you to this [i.e., to your death], of what use was the rule?” and The Joker: “The only sensible way to live in this world is without rules.”), but unlike Nietzsche (and Jesus) they are left with a life-denying nihilism because they don’t attempt to engage in the “transvaluation of all values” by building a new life-affirming morality based on joyfulness rather than legalism. (Beyond this nihilism, there is also a fairly obvious — though unremarked upon by Hesiak — link between Chigurh’s coin tossing [“Call it.”] and the coin tossing of The Joker’s protégé Two-Face [“The world is cruel. And the only morality in a cruel world is chance. Unbiased, unprejudiced, fair.”].) 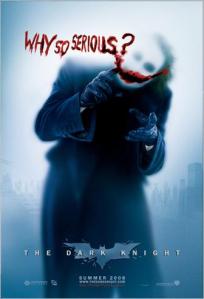 Hesiak has two criticisms of The Dark Knight. His first problem with it is that it explains its philosophy too verbally instead of letting it come out through more cinematic means. He writes that in No Country “no one in the film explains to the audience, or to any other character in the film” the kind of things The Joker is always explaining to Batman. This might be a fair criticism — but in general I think The Dark Knight is interesting insofar as its explicitly philosophical musings pull us in conflicting directions (see my earlier post on the film). These aren’t explanations as much as they are questions.

His other problem is that the film is too nihilistic and doesn’t offer any hope. He writes: “So I suppose I could summarize my opinion of No Country of Old Men by saying that I experienced it as a medium through which I lived out my life and my death, and that it was a refreshing experience after Batman: Dark Knight, through which I felt as though I simply experienced my death.” This criticism is less fair insofar as The Dark Knight is part of an ongoing series. I expect (or rather, hope) that in the next Nolan-directed Batman film we will see Batman beginning to find his way out of the darkness into which he has descended in the first two films. If The Dark Knight is the middle film in a trilogy, it makes sense that it would be the darkest and least hopeful.

Furthermore, I disagree with Hesiak’s suggestion that Chigurh is the “main character” of No Country. I think Sheriff Bell is the main character. (Clearly Llewelyn Moss is not.) On my view the movie is about the sheriff’s confrontation with the inexplicability of evil. It narrates his struggle to find meaning in the kind of world where Anton Chigurh could exist. In other words, No Country For Old Men is about the problem of evil.

But the Coens’ film doesn’t seem to have much to say about the solution to the problem. It just wants to make sure we understand why and how the nature of evil threatens the meaning of life. The Dark Knight, on the other hand, goes further. The Nolans’ movie is also about the problem of evil, but, like Batman Begins, it movie is interested in exploring — and criticizing — various possible solutions to the problem. True, the Nolans tend to talk about their themes as much as they dramatize them, but I don’t see that as being as problematic as Hesiak does.

But regardless of whether you ultimately agree or disagree with Hesiak’s essay, it is definitely worth reading. Check it out here.