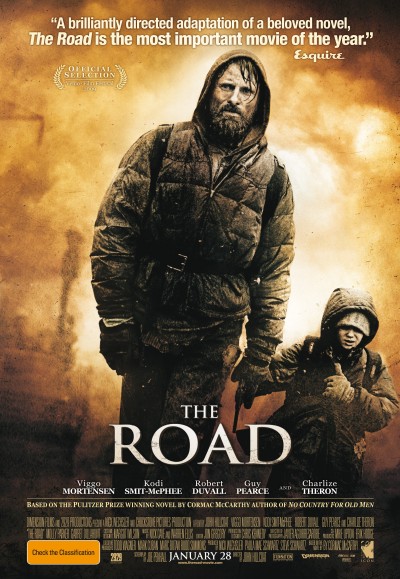 Cormac McCarthy’s The Road is a dark story, but it is not nihilistic.  The movie version of The Road (Hillcoat, 2009), at least, is ultimately a story about hope.

In fact, The Road is a story about hope precisely because it is a dark story.  A key line from the film wisely illuminates the link between hope and horror:

The fact that you are still affected by the horror in the world means that you still have hope that things can be different.  You still have a vision of goodness that can challenge the bad things that happen.  But when goodness  becomes a dream, an escape from this world, then you have truly given in to nihilism.

The Road also makes a nice post for Father’s Day, since the story’s hope is generated in the exchange between father and son.  The Man (played by Viggo Mortensen) knows his Son is the only hope for the world:

“Sometimes I tell the boy old stories of courage and justice – difficult as they are to remember. All I know is the child is my warrant and if he is not the word of God, then God never spoke.”

The very act of having a child is an act of hope, an act the Man’s wife could not share.  She lost her hope.  She commits suicide and would have been happy to take her family with her.  The Man, however, sets out on the Road with the Boy.  It is a journey “south” to the “sea”, a mythical destination that is less important than the hope embodied in the journey itself.  So, while the Man seems to have very little hope left about the goodness of the world — he is fearful and suspicious of everyone he meets on the Road — he does have hope that his Son can be the word of God in the world, a beacon of hope in the darkness.

The Man tries to teach his Son both to be suspicious of others and to keep the fire of his own humanity alive:

“There’s not many good guys left, that’s all. We have to watch out for the bad guys. We have to just… keep carrying the fire.”

The Man succeeds in teaching his Son to carry the fire of humanity, but, as the Son realizes, that means being able to hope that there really are good guys out there — something the Man is no longer able to do.  When they find food, they say a prayer of thanks to “people”.  Then they hear a dog barking — which, later hints suggest, belongs to some of the “good people” — and the Man, assuming the worst, says they must pack up and hit the Road again.  The son wonder’s why they must always assume the worst.  Maybe there is goodness left in the world; after all, they did find the food.  The Boy still has hope that God is alive.

Every time they meet someone, the Man is suspicious.  He assumes everyone is one of the “bad guys”.  But every time they meet someone the Boy is hopeful that they have found one of the “good guys”.   Sometimes, even when somone does turn out to seem like one of the bad guys, the the Boy is still hopeful.  The Boy realizes that hope entails not only trusting others and giving them the benefit of the doubt, but that hope also entails forgiveness.  When a Thief takes their food and blankets, the Man not only takes their own things back but also takes all the Thief’s clothing, though it means certain death for the Thief.  The Boy, however, wants to forgive the Thief.  If we’re the good guys, we can’t just leave people to die, he reasons.  The Boy still has hope that morality has meaning.

An Older Man they meet on the Road (played by Robert Duvall) has lost his hope: “If there is a God up there, he would have turned his back on us by now. And whoever made humanity will find no humanity here.”  He can’t even bring himself to hope for death: “Do you ever wish you would die?” the Man asks him.  “No. It’s foolish to ask for luxuries in times like these” the Old Man replies.

In the end, the Man is able to affirm the world.  Even as he is dying, he says, thinking of his Son, “If I were God, I would have made the world just so and no different.  And so I have you.”  In his Son, his last link to humanity and the symbol of hope, he has found reason to live, to keep carrying the fire.

And in the end, the Boy is right.  There are still some good guys out there.  After his father dies he meets another family.  One suspects the Man would have killed them.  The Man already killed at least one good man (though that man, out of fear, did shoot first).  But the Boy is able to “take a shot” and hope for the best, even though he can’t know for sure that the Veteran he has met really is one of the good guys.  And, really, it is the Boy’s hope that allows the Veteran to be the good guy the Boy hopes he is.  Instead of assuming the worst like his Father had at the bunker and again losing the goodness that God has provided, the Boy’s hope allows God’s goodness to abide in the world.  God has spoken, for the Boy is, as his Father saw, the word of God.