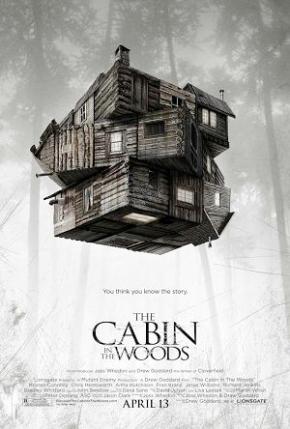 This spring two strikingly-similarly themed movies were released within three-weeks of each other.  Joss Whedon’s Cabin in the Woods and Suzanne Collins’s The Hunger Games both tell the story of teenagers who are trapped in an artificially controlled environment to be killed by a totalitarian bureaucracy.  Both films calls this killing a “sacrifice”, though Cabin emphasizes this theme more strongly, and both films connect this child sacrifice to representations of violence in the mass media, though Games emphasizes this more strongly.

Thus both films have clear political dimensions, lamenting the way our social systems are designed to sacrifice some of us for the benefit of those in power.  The system is a bit more insidious in Cabin, because the sacrifices are rationalized as being necessary “for the good of society”, but both films play with the ways the system coerces its victims into “freely” choosing to participate in the method of their own death.

(Warning: don’t read any further if you don’t want to know how these two movies end.)

Most strikingly, both films end with two remaining teenagers, a boy and a girl. In both films, the girl is told that she must kill/sacrifice the boy to save countless other people.  In both films, the heroine refuses to kill her friend.  But, despite similar climactic scenes, there are importance differences between the films’ worldviews.  The Hunger Games is much more deeply aligned to Christianity than Cabin in the Woods.

At the climax of Cabin much more is at stake:  by refusing to complete the child sacrifice, the heroes Marty and Dana are condemning humanity to extinction at the hands of the “Ancient Ones”, evil Cthulhu-like gods who ruled the earth before the time of human beings.  In Games, however, the heroes Katniss and Peeta are fighting only for their own survival and ability to return to their families.  (In the novel they are fighting for food for their starving communities, hence the title “The Hunger Games”, but this element is not mentioned in the film version.)  More importantly, Katniss and Peeta are spared and allowed to return home, while Marty and Dana (along with everyone else!) die.

Obviously Joss Whedon is more pessimistic than Suzanne Collins.  Both films allow their heroes to gain some sort of political enlightenment and liberation from the oppressive system.  But in Games the heroes fight the system and survive, while in Cabin resistance is futile.  Yet there is more going on here than simply Collins’s hope in our ability to change unjust political structures.  The most important difference between the films is the way the heroes fight the system.  Though they (reluctantly) engage in violence throughout the film, at the climax of the film the heroes of The Hunger Games reject violence in a way that embodies a kind of Christian pacifism.

In both films, the heroes refuse to kill each other in the end, but they do so in importantly different ways. The heroes of Cabin are apathetic, even nihilistic.  In the end, they don’t fight the system, because they can’t see anything worth fighting for.  When given the choice of self-sacrifice, the opportunity to be a martyr, Marty is unmoved.  He will die as a sacrifice to save humanity or he will die along with everyone else, but either way he’s going to die, and it doesn’t matter to him.  He’s not just being selfish.  He reasons that if the only way humanity can save itself is by constructing a system of torture as evil as the demons the system is meant to keep at bay, then humanity isn’t worth saving.  And so Marty and Dana do nothing.  They rightly see that evil must never be done in the name of fighting evil, and their refusal to participate in the unjust system is admirable.   Yet they are entirely passive.

Passivism is not the same as pacifism.  Christian love does not call us to do nothing to stop evil.  Pacifism is peacemaking.  It is active non-violent resistance, not merely passive non-participation. This is the insight of The Hunger Games.  Unlike Marty and Dana, Katniss and Peeta find a way to act in opposition to the system. Peeta plants the seed earlier in the film when he tells Katniss, “I just keep wishing I could think of a way to show them, that they don’t own me.”  Katniss figures out how to do this at the climax of the film.  In full view of the cameras, she and Peeta begin to commit suicide.  If they die resisting the system (instead of dying as participants in the game), they become martyrs and their blood becomes the seeds of revolution.  The politicians running the game know better than to allow this.   They stop the show and pronounce Katniss and Peeta both winners.  But the damage has already been done.  The seeds of revolution have already been sown.

The end of Games isn’t a “happy ending” simply because the heroes live.  The ending is happy, because the heroes have defeated the system; they have achieved liberation.  The heroes of Cabin seem to think of themselves as liberated, too.  They, too, have broken the oppressive system designed for child sacrifice.  But they have won their freedom at the cost of human extinction.

The nihilistic implication of Cabin in the Woods is that human civilization, indeed creation itself, is founded on an original evil that cannot be defeated.  We will never be able to have a just social structure.  The best we can hope for is to “get off the grid”, to take a small group of friends and hide out in the wilderness.  Of course, this hope turns out to be illusory, because the system extends even into the woods.  The Hunger Games, on the other hand, has faith that creation is founded on an original goodness and dares to hope that through non-violent resistance, motivated by the power of self-sacrificial love, humanity can be saved.  God does not demand child sacrifice, and the oppressive system has already been defeated by the Resurrection of Christ.

7 thoughts on ““I just keep wishing I could think of a way to show them, that they don’t own me.””