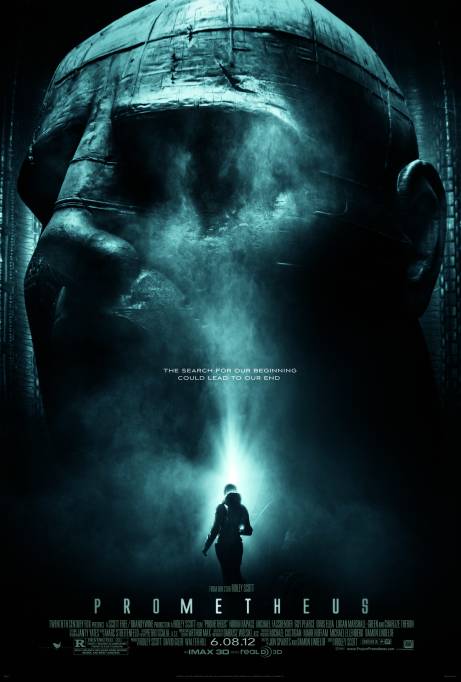 At first, faith doesn’t seem to come off very well in Prometheus (Scott, 2012).  The film portrays faith as merely an arbitrary choice.  If there is no evidence, then how do you know there is a God?  You simply choose to believe it, says the main character Elizabeth in a line repeated several times throughout the film.  This is the sort of blind faith atheists often accuse believers of having.

But things are not quite that simple.  Elizabeth chooses to believe that the cave paintings she has found are an “invitation” to visit an alien planet and to meet those responsible for the origin of human life on earth – the aliens she refers to as “the Engineers”.  The other characters are not convinced.  How does she know there will be anything on the planet when they arrive?  But Elizabeth chooses to believe.  And she’s right.  Her faith is vindicated.  Sort of.

When Elizabeth and the crew of the Prometheus arrive on the alien planet, they do find the Engineers, but they are all dead.  Elizabeth’s husband Charlie, who initially shared her enthusiasm, gives in to despair.  There will be no answers after all.  Even after Elizabeth tells him the Engineers have human DNA, validating what one character sarcastically calls her unproven “thesis”, Charlie is not impressed.  So they created us, he says, but that doesn’t point us to God.  Elizabeth chooses to see the problem differently:  if they made us, then Who made them?

Of course, this is a horror movie in the Alien universe, so it turns out that not everything on the planet is dead.  And when the crew of Prometheus realize that the Engineers have been planning to destroy earth, things seem even worse for Elizabeth’s faith.  Maybe she did find her Creators, in a way, but they want to kill her.  This is the problem of evil times ten!  Near the end of the film one character comes to the sad conclusion that “there’s nothing” after death.  But it’s worse than there being no God; in this world, the gods themselves are evil.

The film takes place at Christmas – the feast of the Incarnation, when God became human – so it is not too much of a stretch to read the infertile Elizabeth’s miraculous pregnancy as a twisted parody of the Incarnation.  And it is probably not an accident that her half-human, half-alien offspring has the form of a squid, recalling the evil deities of H.P. Lovecraft’s Cthulhu mythos.  Elizabeth’s Creator has come in the flesh, but he wants to kill her.

Yet again, the film isn’t content to simply ridicule Elizabeth’s faith.  We discover that this isn’t the first time Elizabeth has been faced with the problem of evil.  Elizabeth is the daughter of a missionary who was killed by an Ebola infection.  Elizabeth could have lost her faith when her father died, but she didn’t.  She chose to keep looking for answers.  There is something ennobling about the film’s final moments when Elizabeth again chooses to keep the faith despite everything.

Many critics have been disappointed that Prometheus asks big questions about God and the origin of humanity and then turns into an action movie with nothing interesting to say about those questions.  This is an odd criticism, because it is such a great action movie, that the ideas are somewhat secondary.  Even apart from the wonderful action sequences, the beautiful production design and cinematography, Michael Fassbender‘s performance alone makes the film worth seeing.  Sure, the ideas are underdeveloped, and much of what the film does have to say about faith is a bit silly.  But that doesn’t ruin Prometheus as a movie.  Nevertheless I think the film does have something interesting to say about the nature of humanity.  I suspect the filmmakers are saving their “answers” for sequels.  But focusing just on Prometheus itself, the fact that there are no answers is a large part of the point.

The ship’s android David can’t understand why Elizabeth would care about the Engineers’ motives.  Her passion doesn’t compute.  But the point of the scene isn’t just that faith is something irrational or emotional.  Rather, the point is that faith is the essence of humanity – the source of what David earlier calls Elizabeth’s “survival instinct” – that which allows us to keep going despite the sort of fear and disappointment a robot can never understand.

Elizabeth says she was “so wrong” about the Engineers.  But rather than give in to despair, she adjusts her questions keeps asking.  This search for meaning is what makes her human.  As St. Augustine says, God has made us for himself and our hearts are restless until they rest in him.  The day Elizabeth’s heart stops feeling the restlessness of the search for meaning – the day she, like David, wants her Creator to die so she can be free – is the day she ceases to be human.  She has faith that understanding can be found, even if she can’t yet see the answer: “I’m still searching,” she says.