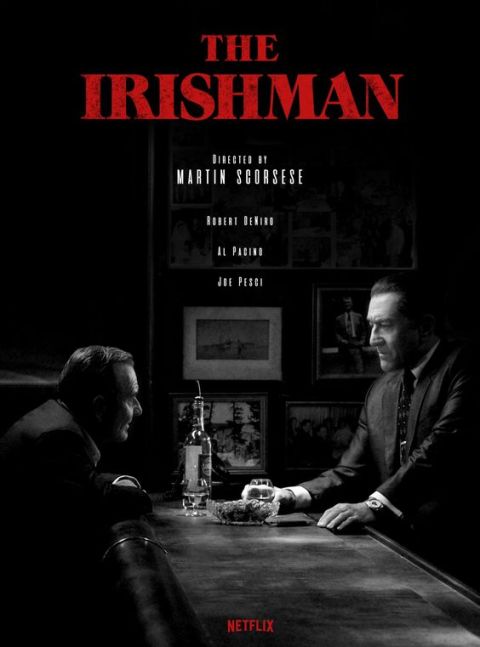 Let’s get the negative out of the way. The Irishman (Scorsese, 2019) is too long and the use of CGI deaging technology was ill conceived. It would have been better as a tv series with eight 25 min episodes like the exquisite Russian Doll series. And as good as the CGI looks in this film it doesn’t work psychologically! We all know what young DeNiro looked like so the tech is distracting. I kept seeing young DeNiro’s face on old DeNiro’s body. Scorsese should have cast a different actor for the flashback scenes like movies have traditionally done. Ok. Enough with the negative. Because really this is a great film that deeply moved me by the last third.

If you’ve seen Goodfellas (1990) or Casino (1995) you have already seen the first 2/3 of this movie. The Irishman doesn’t have the same energy and flair that those movies had — it is more classical, closer to The Godfather than Goodfellas — but it follows the same basic plot of a typical Scorsese gangster picture. The hero gets entangled with the mob and is tragically destroyed by it. This movie includes that whole typical story. But then Scorsese adds a whole new story afterwards, a kind of long coda where the tragic hero feels remorse and begins to seek redemption.

The Irishman ends with what could be the best prayer in all of cinema: God help us see ourselves as you see us. That I now think has been Scorsese’s mission as a filmmaker at least since Raging Bull which which ends with the line: I once was blind but now I see. That was Scorsese’s way of describing how making the movie had helped him see this brutal boxer character in a new light. I think that’s probably how all of Scorsese’s movies work.

My two favorite kinds of Scorsese movies are his gangster films like Goodfellas and Casino and his religious ones like The Last Temptation and Silence. Now in The Irishman for the first time since Mean Streets Scorsese has bridged the gap between these two kinds of film. He’s come full circle In his career.

And he’s doing something new this time around. He has always portrayed the consequences of crime and violence but his gangsters have never been redeemed before.  Here DeNiro’s character Frank is not quite redeemed either but the door is left open in a way it never has been before. It could be Scorsese being tired of being misunderstood and finally making his point obvious. Or it could be a mature viewpoint finally recognizing the possibility of redemption for gangsters. As an older man Scorsese finally moved beyond glorifying the gangster lifestyle as he perhaps inadvertently did in his younger days. He always recognized The inherent self-destructiveness of violence but he also sort of admired the gangsters or at least portrayed them in a glamorous way that allowed viewers to admire them. Here there is not the least whiff of glamorization. Nor is there the complete condemnation of his previous gangster films. They ended in tragic despair. The Irishman ends with at least a sliver of hope and the sense that Frank tried to do the right thing the best that he knew how — at least that is how Frank tells the story from his perspective and we come to sympathize with him.

Like Frank’s daughters at the end of the film we have a hard time forgiving him because he doesn’t seems to understand what he has done or what he should be sorry for. From a religious point of view we could say he doesn’t see his actions as sin. But neither does he see his belovedness to God. He clings to his good intentions behind all the bad things he’s done but he doesn’t really believe he deserves to be forgiven and neither do we if we’re honest. Both him and us need to see that it is never too late for redemption. I don’t think you have to be religious to believe in the sort of resurrection that’s possible for those who can admit that they failed to live up to the goodness that was in them and to strive to make things right.